No visit to the north-east would be complete without at least a glimpse of Hadrian’s Wall, once of the most northerly outpost of the vast Roman Empire. On a panoramic tour you will hear stories which bring the area to life –we can only imagine the hardships faced by those brave men 2000 years ago.

The Roman legacy is still with us- the remains of many Roman Forts can still be visited along the line of the wall and several museums bring the archaeology to life.

Housesteads Fort, the highest on the wall, has a very well preserved Roman latrine, a communal affair in those days! And Chesters has the best preserved military Bath house in Britain, flushing straight into the river North Tyne. Not far away is Vindolanda – the only place along the wall still carrying out archaeological excavations, and the home of the famous Vindolanda Tablets, giving us great insights to the lives of the soldiers and civilians along the wall.

Every summer archaeologists and volunteers from around the world work together to make new discoveries- recent finds have included a pair of Roman boxing gloves and a Roman toilet seat!

If you fancy stretching your legs we can walk along a section of the Hadrian’s wall path. Some short flat sections are easily accessible or if you are feeling more adventurous, we can trek to see the sycamore tree which was made famous by Kevin Costner in the film Robin Hood, Prince of Thieves.

Nearby, there are some historic local pubs serving up a hearty lunch – or maybe visit the town of Hexham with its beautiful Medieval Abbey and Visitor centre or have afternoon tea on one of Corbridge’s quaint cafes.

You took our trip to a new level… 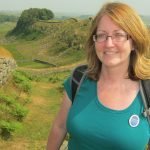 Thank you Laura, for taking a great trip and making it extraordinary!!!!! Your knowledge of the history and sights throughout England, your deep understanding of the culture and people both present and past, your love of your country and sharing its history shone through in every moment you spent with us.  You guided us on a spectacular journey, providing non-stop adventure and fun.  The tour was well extremely well planned, full but not overfull, relaxing, stimulating, interesting.  You ensured timeliness and punctuality of us, our different modes of transportation, of tours and of meals, not an easy task with a group of 35ish.  I appreciated that you continued to research and update your information as we traveled across your beautiful country and, when time allowed, you provided impromptu additions to our adventure with extra stops and revised routes.  What a wonderful experience, thank you for making it ‘rise above the rest’.
https://laurarhodes.co.uk/testimonials/sincerely-i-mean-it-you-took-our-trip-to-a-new-level-jane/

Excellent – a hive of information

Excellent - a hive of information
https://laurarhodes.co.uk/testimonials/excellent-a-hive-of-information/

A friendly knowledgeable guide - and an excellent choice and we will use you again
https://laurarhodes.co.uk/testimonials/a-friendly-knowledgeable-guide-and-an-excellent-choice-and-we-will-use-you-again/
0
0
Laura Rhodes North East Tourist Guide
Scroll Up